When you head to a supper club alone, you know you’re off on an adventure. Without the shield of a companion, it might be daunting, but everything’s louder and more colourful too. You’re definitely going to have some new conversations.

So as I cycled up the canal tow path, ready to take my place at the Headway Eats event, I felt an anxious thrill that took me back to the days of solo travel. A mix of nerves, excitement and a hunger for the unexpected.

And unexpected, it was. From the holiday-like welcome at the water’s edge (sandalwood drink with basil seed garnish – beat that, hipsters!) to the songs and involvement in Headway’s world; this was a dinner that felt like a trip away.

Headway East is a charity that supports brain injury survivors. One of the ways they do this is by drawing on members’ creative talents. They’ve exhibited art at the Southbank Centre, they’re soon to join the Science Museum in a show on Identity, and as a ‘showcase to the world’, their seasonal supper club has become quite talked-about. 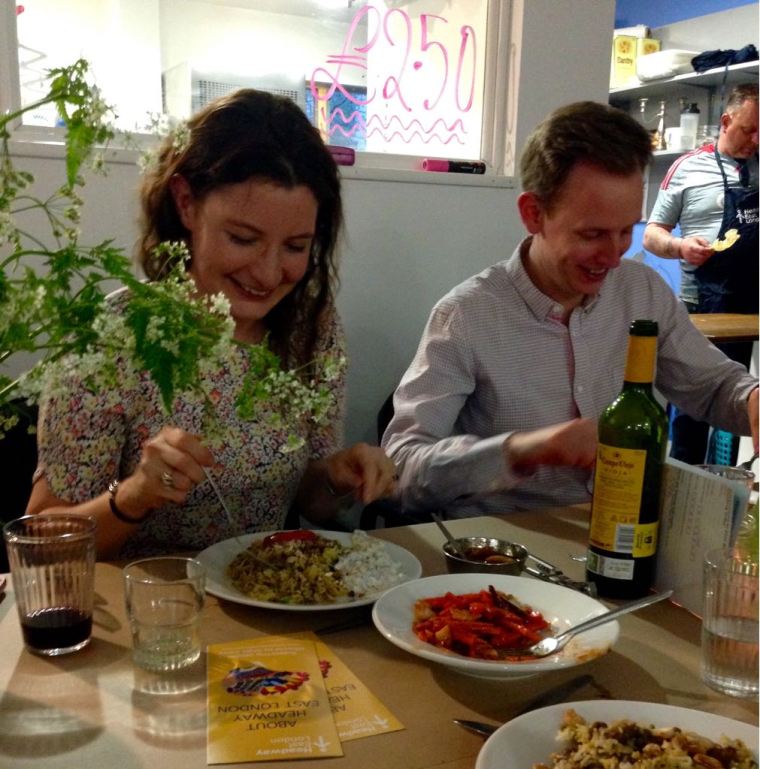 Tonight’s menu took us to India’s Punjab, and is the brainchild of member Freddy. The menu, written up on the kitchen window, is instantly reminiscent of North India’s late night street food haunts – I mistook it for decorative writing at first! But getting to know my table gang – a happy mix of guests, Headway members and employees – meant I wasn’t guessing long before a spectacular starter of samosa chaat landed.  That’s tamarind-sharpened veggie samosas beneath a delight of chickpea and pomegranate jewels. So fresh. And crazy-generous portions too. I was trying to pace myself, when a host of golden poppadoms floated in. No exaggeration, these were the lightest dreams of poppadum I’ve ever tasted. Made by the father of Headway staff member, Tas, they came with a carrot-coconut pickle: another flavour-wow and we’ve barely begun.

The difference between a supper club and just going to a restaurant is the sense of immersion. You’re all enjoying the same food in synchrony, and in this case, stopping together to hear a song or a story.

Tonight’s talking point was the question ‘Can I be rebuilt?’ A survivor gave a moving talk in which he said “Our humanity does not depend on our body”. We grow and cope with what our body does to us. This was echoed by my table-mate, Christian. He was a Director at Mensa (still carries his card) and a keen skier, but following an assault, suffers seizures and tremors, and struggles to remember what he’s meant to be doing next. He’s lively and funny, but can no longer work. Headway provides a lifeline to Christian it’s a place to hang out, have therapy and do things – often reigniting a creative side.

Now, here’s a coincidence, which shows me to be super lucky. The evening falls on the first anniversary of my own brain surgery. I had a sizeable cyst removed which had been growing for years, pressing against my short-term memory. Nothing like the heroic come-backs of the Headway members but I do at least have a few weird cavities in my skull; and somewhere between courses, three of us were comparing lumps and bumps. Probably bad table manners, but lovely bonding.

Then the main course stormed in. Lamb biriyani. Gorgeous slow cooked lamb with pickles and raita. Amazing, yet I could barely make a dent on the mountain on my plate.

Ooh I’ve been looking forward to this! says Sandra, opposite me. Her story: she fell down the stairs, as anyone can, and lost weeks to a coma. She now helps out at Headway but misses being able to cook like she used to. Flavour combinations no longer come naturally. The brain is an amazing and terrifying thing.

The dessert is a favourite of dinner mastermind, Freddy. And it’s a childhood fave of mine too: Rasmali! A scarily fattening pistachio curd. Sweet and milky and I could just swim in it forever.

Over too soon, it was followed by a shower of thank yous to the kitchen team and fennel-y mukhwas (the mouth freshening seedy dish you’ll know from Indian restaurants).

This evening spun me into worlds I doubt I’d have crossed otherwise. As team member Kitty Edwards says, the great thing about Headway Eats is the atmosphere. “Though a lot of effort is put in to producing a feast for everyone it’s really just nice to feel like everyone there is supporting this cause and wanting us to succeed.” Well I’ve already bought my tickets for the next adventure! It’s in July.

Snap up some tickets to the event here